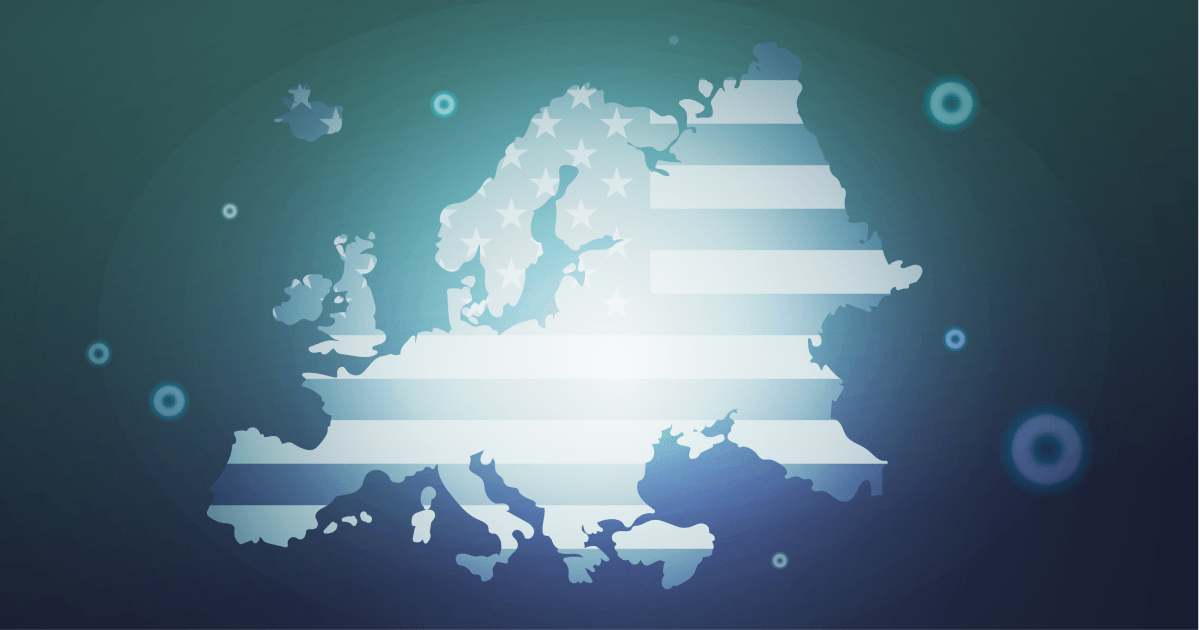 America is the centre.. sorry... The center of the Universe. To Americans, at least.

As a Dane, it’s not uncommon to encounter Americans who think that Denmark is the capital of Sweden. That might, of course, indicate something about Scandinavias insignificance. But it also says something about the American-centric perspective that many Americans have.

That is important to remember when expanding your European business to the US. The cultural diversity in the so-called “Western Civilization” is more significant than you might think. To name a few examples, Americans are generally more individualistic than Europeans. They work longer hours, and more importantly, Americans load their washing machines from the top while Europeans fill it in the front (Wonder how the Chinese approach it?).

We are not claiming to be experts on this topic. You can read this on the internet or talk to other companies that have been through this. Or you can do like we did and talk to Benjamin Webb. He is the Managing Director in Deliberate PR, an agency specializing in bringing Nordic and European startups to the UK and the US.

“A British audience will warm to a startup because it is Nordic or German, because we project virtues on these countries and explain their business models by the regions in which they were devised. However, an American audience is less-versed in the nuances of European culture. So localize from the outset,” he told us.

Being able to create brand awareness and attention incremental for a successful expansion. That should be clear and obvious. What makes it complicated is that you need to Americanize your business in a convincing way. And done perfectly, you must pull it off while maintaining your authentic European personality.

Auch, you might think. That is why we’ve gathered some tips and tricks to what you can do.
‍

PR as a shortcut ‍

An essential shortcut to more brand awareness and credibility in the market goes through press coverage. Marketing is very expensive in the US: Paid ads, sponsored content, hires. It’s just another ball game. In that sense, PR can become a cheap way to establish your name.

“News-based PR can prove pivotal to getting a flag in the ground Stateside and starting to get talked about in a manner conducive to the fulfillment of your startup’s strategic objectives,” said Webb from Deliberate PR.

"99% of PR is a waste of time, but an intelligent and news-based approach to editorial media can result in exposure to investors, recruits, as well as explain what your startup does in a manner that I would argue is more effective than any advert," Benjamin Webb.

‍
“99% of PR is a waste of time, but an intelligent and news-based approach to editorial media can result in exposure to investors, recruits, as well as explain what your startup does in a manner that I would argue is more effective than any advert. Your sales teams can also get traction through leveraging editorial media exposure. Conference organizers also favor having people onstage who benefit from a media presence. If some of the above are objectives in the US, then news-based PR is what you need.” he elaborated.

However, getting attention from American publishers is easier said than done. European companies try to settle in on the American market all the time, so that is not a story in itself. That is why Webb and his agency have developed a cunning strategy to make it into the American news cycle.

“We use the UK as an entry point to the wider English-speaking world: the localization of a startup in the British media making subsequent localization in the US all the easier. As a result, we work for a number of startups and scale ups in both the US and UK. The UK media is disproportionately influential globally as a consequence of our long-established media titles, many of which have successfully embraced the digital revolution, becoming among the most-visited daily news sites in the world. Ultimately, it’s a language thing...it’s easier to go from the Financial Times to the Wall Street Journal than it is Jyllands-Posten to the Wall Street Journal. You want to reach the biggest English-language market, then there’s a compelling argument for establishing yourself in the smaller English-speaking nation on your doorstep - which is naturally more interested in European concepts than the US,” he explains.

That is a more time-consuming strategy, but if you are in a rush and want to skip that initial step, Webb still has some good advice: “If you are set on going straight to the US, though it might feel counterintuitive, start by looking closer to home. Europe is filled with freelancers and correspondents filing content for international titles, including many US papers. The appearance of a news feature in a US title about the amazing things that you are already doing in Europe is a door-opener, and these correspondents might be the route.”

Regardless of the approach you choose to go with, you better do your homework and stress-test the relevance of your startup to a US audience before spending big money on a PR agency.
‍

"Having a dream to one day make it in the US, though charming, is neither unique nor justification for a journalist to write about a company. Naturally, only approach US media once your product is actually available to US users," Benjamin Webb.

‍
“Having a dream to one day make it in the US, though charming, is neither unique nor justification for a journalist to write about a company. Naturally, only approach US media once your product is actually available to US users. American case studies are crucial. European user studies are rarely considered relevant. If possible, have user behavioral data from US users ready to go. Certainly, have US-specific data which quantifies and localizes the problem which your startup promises to solve for American users. If you are intending to open a US office and appoint American country managers or senior team, only approach the media once they are in place. The US media wants to speak to people on the ground and in the country, rather than someone on the other side of the world. Occasionally, funding announcements referencing money being used to expand over the Atlantic can serve as a trigger for US coverage. 99% of funding announcements mention a vague plan ‘for international and US expansion’ without any of the specifics: make your plans appear legitimate by naming US team members and office location in the investment story.”
‍

‍An easy way to build trust in the American market is to Americanize your website. You need to list your prices in US Dollars and use American English instead of British English (It means you want to Americanize, not Americanise) so your American visitors won’t feel alienated or doubt whether your product is for them. You also want to use a .com domain instead of .dk or co.uk to prevent an increasing bounce rate. Show them that you serve their needs.

Other low-hanging fruits would be listing an American phone number on your website and showing Americanized social proof such as logos and user testimonials from US companies. If you don’t have (m)any of these, you can compensate by including some trust badges, certifications, and review site references. In case you sell directly from your website, you also want to emphasize that you ship out in America and offer American payment options such as American Express and Diners Club.

As Benjamin Webb mentioned in our conversation: “Much depends on the product that you are offering. However, if yours is not a startup inextricably linked to virtues associated on the part of an American audience with a particular country, then it might be best to go fully American in terms of website, branding, and the rest. Most American consumers would probably be surprised to discover that Spotify is a Swedish company, because it has become so ubiquitous and part of everyday life without any cultural friction. There was no ‘Europeanness’ that American consumers had to get their heads around.”

So to summarize a bit, you need:

Editing a website is fairly straightforward, but telling your story and presenting your content in a way that appeals to an American audience is significantly harder.

It’s often said that American content is easier to digest and more based on quick facts and statistics. On the other hand, you also find experts claiming that Americans tend to care more about the purpose and narrative of a business than Europeans do. Whether one or the other is true probably depends on... Well. It depends. But no matter what, it’s a good idea to invest in American copywriters, and content creators, especially for the more salesy and search engine optimized listicle content, whereas thought-leadership usually requires a more authentic approach.

"You need to approach it more like a tourist than a conquistador."

‍
Nevertheless, it’s important to keep an agile mindset and remember that you can’t conquer a new continent immediately. Opening a new market is not unlike opening a new business. You need to approach it more like a tourist than a conquistador. Read some guidebooks, try out stuff, talk to some people. You need to be curious, listen, and learn from the locals to adjust to their customs. When in Rome...

However, there are some general rules. When it comes to advertisement, Americans are usually more forgiving on aggressive marketing. Competitor bidding and compare pages are generally not frowned upon in America like they are in Europe. Americans expect you to be able to tell your clients why you are better than your competitors and how much value you create, which is sometimes perceived as distasteful in some parts of Europe. What makes your communication more tricky is that Americans are often more politically correct. That allows European companies to be edgier in the advertisement and use more controversial messaging (and nudity if that is your bag). Check out some communication guidelines from some established American players and adjust yours accordingly. That might save you from a shitstorm or two.

No matter what, you need to realize that you are a stranger in a strange land. You need to adapt to them, not vice versa. All the low-hanging fruits should be no-brainers. Working with thought-leadership, however, is more challenging. Your content must be sound, authentic, and show real expertise, so you can’t fake it for very long, and your content must express some personality. However, an easy way to Americanize European content a bit is to use American references and phrases.
‍

‍As with everything else related to brand and marketing, there is no definitive guide or checklist to go through because it’s no exact science. And to make it even more complicated, America is the most crowded marketplace in the world, and we haven’t even discussed internal differences.

However, the most important lesson to keep in mind is that even though you are only just getting started, you must seem like your American journey is already well underway. Be aware that Americanizing is the key to gaining trust and credibility in the American market.