Legal Tech Is Not About Lawyers (Survey Shows!) 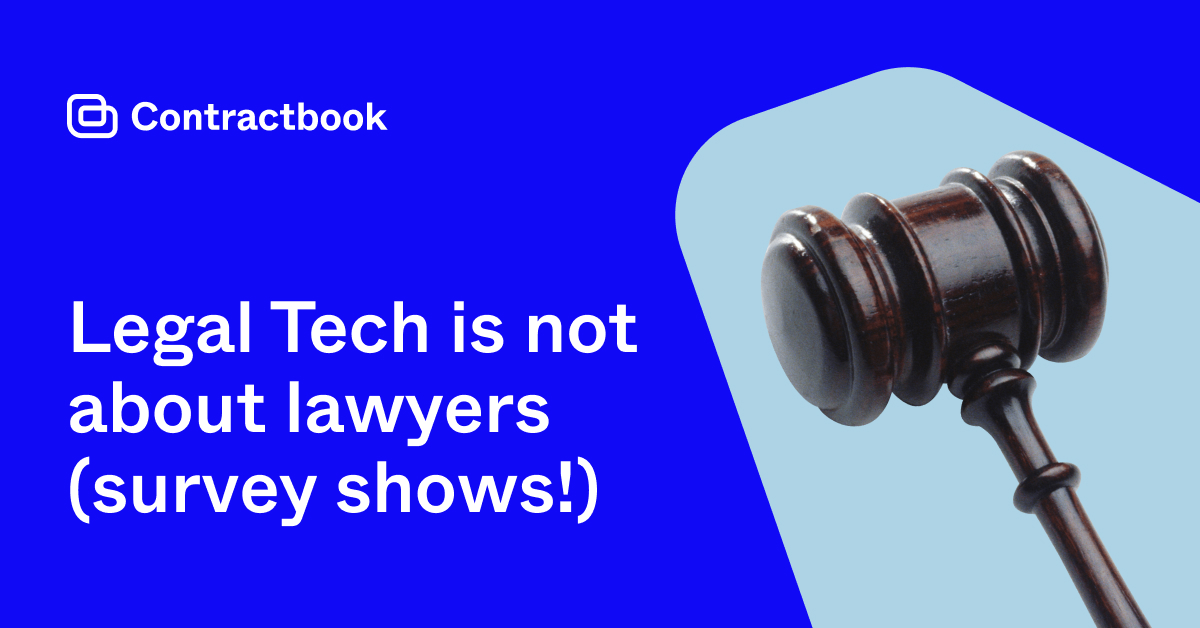 Why is it that fintech runs away with the most impressive investments? The largest valuations? And all the most important news stories?

Well, first the fintech market is a lot more mature. It has been straightforward to digitize the numeric financial industry, but the letter-based legal practice has proved harder to translate into zeros and ones. Secondly, the legal sector has shown to be conservative and risk-averse compared to the financial industry despite both sectors being highly regulated societal pillars. But as Niels Martin Brøchner recently pointed out in a post in Forbes, there is also a third important factor...

Legal tech is often perceived as lawyer software. Just look at their Wiki-pages. The article about legal tech talks about it as tech “to provide legal services and support to the legal industry”. Meanwhile, fintech is described as “technology and innovation that aims to compete with traditional financial methods.”

Fintech takes part in the usual tech industry tradition of challenging status quo and the narrative builds upon young entrepreneurs disrupting traditional industries in order to democratize a field and improve consumer rights. Legal tech, on the other hand, has somehow ended up safeguarding the traditional industry.

There has been much talk about robots and new technologies making lawyers redundant and jeopardizing the rule of law. But it’s safe to say that such a reality has never materialized. But neither has the original idea that the digital movement was supposed to improve access to law and make expensive legal services cheaper for the end-user. In many ways, it’s been more about increasing profits and optimizing internal processes in the traditional legal industry. No wonder media, investors and consumers find fintech more interesting.

There has, of course, been more B2C-oriented companies like Airhelp or online will-generators. There have been digital signatures and contract management systems, like our own, aiming to make legal work easier for the average business. But go through any list of legal tech vendors, and you will find that the vast majority is trying to sell to lawyers. Either they are targeting law firms – or they are aiming to convince legal counsels.

There is nothing wrong with that. Contractbook has also sold to both law firms and counsels – and we will continue to do so. But it’s a missed opportunity and an unfortunate barrier to legal innovation.

Legal tech must reach a broader audience and make a bigger difference to get rid of its inferiority complex. ‍

About a year ago, we started the research project to find out what small and medium-sized businesses were looking for in contract automation. What did they want? And who wanted it?

Over a year, we had 7000 conversations where we gathered data into this final contract automation survey.

Interestingly, our research showed that it’s not the legal counsels and the lawyers who are driving the automation agenda in the smaller companies. We saw that legal counsels were interested in our product, but we also saw that very few of them ended up buying. They were more hesitant, had less budget and the use-cases were less obvious. Instead, we saw that operations and sales teams were much more keen on buying contract automation.

In many ways, I would say yes.

Our research clearly shows that sales and operations teams are driving legal innovation in the automation field. They are doing so to increase their efficiency and produce more reliable results. They are mainly focusing on their sales contracts and the most common automation is a two-way synch with their CRM. The use case is extremely straightforward and pragmatic. It creates immediate value with saved time, better accuracy, more consistent data and a super scalable setup.

To me this shows just how much potential there is for the legal tech companies if they targeted the broader mass markets rather than serving only law firms and legal counsels. There are more than 22.6 million SME’s in Europe and in the U.S. there is 30 million. Most of them could optimize the way they deal with legal work and contracts in some way or the other – and still, most legal tech companies, circle around the same few thousand law firms and the same ol’ enterprises.

Other functions are craving tech solutions to make legal work easier, faster and cheaper. They are waiting for new solutions while the market is busy serving a group that is actually preventing the innovation from happening with their hesitance and conservatism. It really doesn’t make any sense.

A Holy Trinity of Legal Tech

As of lately, I’ve also shifted my focus away from selling to law firms to selling with law firms. I’ve realized that the future of legal tech doesn’t lie with law firms. It lies with their clients: the companies and the consumers.

The use-cases are much more obvious with these end-users. There is a higher demand for change and innovation, and at the same time, the market is more mature and open to new ideas.

It doesn’t mean that law firms are redundant in the digital transformation. Some law firms have realized this already. They know that legal tech shouldn’t be adjusted to them but serve the real end-user. Those are the firms I am working with. They know that this movement is not just about changing workflows in the firms. The real frontier is providing help to the clients. To make the tech products work where they can do a much bigger difference much faster.

That is the way out of legal tech’s dead end. Don’t serve a narrow elite. Make legal work easier, simple and cheaper for normal people. We are reshaping the role of the law in the legal tech movement. They go from being consumers of legal tech to re-sellers of legal tech, and together we form a holy trinity of legal tech where vendors, firms and consumers meet to promote legal innovation where it makes the most sense.

Not only is that a better story. It’s also a better commercial strategy. For vendors needing a stamp of approval. For law firms getting a cut. And for the end-user finally getting to optimize their legal work. The sooner we realize that legal tech is not about lawyers. The faster we will get this movement going.