Login
Back to library

Contract automation is a fairly new field and we are still in the early days of defining the use cases in the current landscape. So about a year ago, we decided to research the contract automation field by asking thousands of SMB's what they wanted to automate around their contracts. The results is this: The Contract Automation Survey.

Takeouts from the eBook

Its limits are yet to be defined and we are still waiting to see how powerful the technologies can be. Meanwhile, we are also in the early days of defining the value and use cases of contract automation in the current technological landscape. What kind of contracts are companies looking to automate? What problems around the contract management process are they aiming to solve? In other words: What do companies want from contract automation?

About a year ago, Contractbook launched a research project designed to answer those exact questions. This survey is the result of that research.

We knew that we were in pole position to win this market. Contrary to our PDF-based competitors, we apply a dynamic, digital-native data format that makes all the data points in contracts easy to access and build automated workflows around.

We also knew that the market mainly consists of enterprise solutions and that very few contract solutions cater to small and medium-sized businesses. What we didn’t know was what exactly those businesses would like to automate around their contracts.

To find out, we launched an Automate-plan that provided SMB’s with any contract automation we could think of. We gave everyone who booked a demo with us through certain pages a free assessment of their workflow, so we could understand their needs and tailor contract automation setups suited to their demands.

Over the year, our 25 sales reps had almost 7,000 conversations (6,976 to be precise). Some led to a deal and a realized automation setup, others didn’t. But for every conversation, we tracked what these companies wanted from contract automation and what they wanted to automate first.

We asked the companies which contracts they wanted to automate. We asked them to what degree they wanted to use artificial intelligence. We found out who they were, which departments they were coming from and we tracked the most requested contract automation features.

What we found was really interesting. We saw that the companies we talked to were extremely pragmatic. They largely wanted very simple solutions to get rid of the most basic and tedious manual tasks such as moving data between tools. We saw that automated contract execution was equally popular to automated contract creation. And we say that sales teams and operations teams are way ahead of other departments at the moment.

There are probably lots of other interesting conclusions to draw from this data. Our goal of this survey is, first and foremost, to start a discussion about the true value of contract automation and inspire the further development of this fascinating new field.

We think that the data gives interesting indications about the state of contract automation in 2021 and what modern businesses are looking for in modern technologies. We hope that you will think so too. 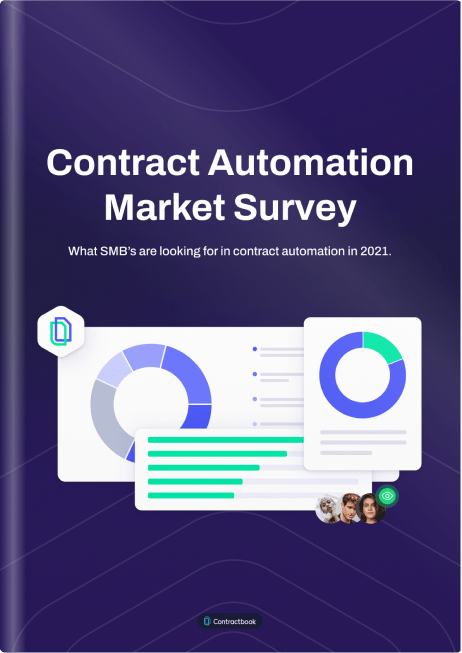 Awesome! Here is a link to our Drive:
Open Ebook
Oops! Something went wrong while submitting the form.